The Race to Space Today: Billionaires and Collaboration 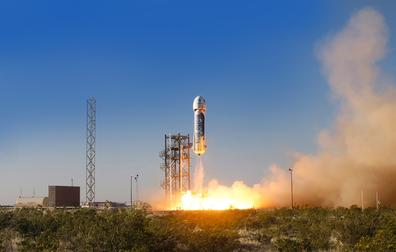 The race to space is drastically different today than it was during the Cold War. The space race during the Cold War consisted of the U.S. and the Soviet Union (now the Russian Federation) competing to be world leaders and dominate space. Now, the space race consists of the U.S. delegating some authority in space development and commercial space tourism to private companies, with some billionaires taking advantage of the opportunity to go to space. On July 20, 2021, Reuters reported that billionaire Jeff Bezos flew on his spacecraft, New Shepard, with his crewmates for a successful 10 minute trip. His success comes only nine days after British billionaire Sir Richard Branson completed his first fully crewed space flight on July 11, 2021. The U.S. government is looking to work with billionaires and other private companies, given how on July 12, 2021 NASA announced the launch of its 2021 Entrepreneurs Challenge, which calls for participants to develop new technologies that advance NASA’s goals. The race to space is now expanding to include billionaires and private companies, with collaboration still being a crucial element.

Billionaires are achieving their goals in the quest to reach space. The world’s richest man, Jeff Bezos, founded the company Blue Origin about 20 years ago. His company’s spacecraft, New Shepard, is named after Alan Shephard, who was the first American in space in 1961. The July 20 flight occurred on the anniversary of Neil Armstrong and Edwin “Buzz” Aldrin being the first humans to walk on the moon, which was on July 20, 1969. According to Reuters, the New Shepard flight was also historic because Wally Funk, 82, and Oliver Daeman, 18, both aboard the spacecraft, became the oldest and youngest people to reach space. The other billionaires involved in space industry pioneers include British billionaire Sir Richard Branson and Tesla’s founder, Elon Musk. Sir Richard Branson began planning for his space flight 17 years ago when he founded his company, Virgin Galactic Holding Inc, in 2004. His dream became reality on July 11, 2021 when he boarded his Virgin Galactic rocket plane, SpaceShipTwo VSS Unity, and flew at least 50 miles over the New Mexico desert, with the trip lasting approximately an hour. In addition, Elon Musk’s company, SpaceX, is planning on sending its first all-civilian crew into space in September 2021. With billionaires incorporating themselves and their companies in the space race, NASA is looking for opportunities to collaborate with the public.

The entrance of billionaires in the development of the space industry signals the presence of private companies in the race to space, especially with the announcement of NASA’s 2021 Entrepreneurs Challenge. On July 12, 2021, NASA announced the 2021 challenge to “invite fresh ideas and new participants” in the creation of new technologies that can advance NASA’s mission at lower costs, with a special emphasis on “reaching out to underserved communities.” As an incentive for entrepreneurs to participate, NASA’s Science Mission Directorate will award finalists as much as $90,000 through the completion of both stages of the competition. Round One of the competition will involve participants submitting a five-page white paper describing their idea, and those chosen for Round Two will be tasked with submitting a longer and more in-depth white paper and pitching their idea in a live Virtual Pitch Event. While NASA has relinquished some control over their space dominance, such as by ending the Space Shuttle Program in 2011, the 2021 Entrepreneurs Challenge showcases NASA’s intent to collaborate with private companies to help further space exploration.

While space exploration now includes private companies and billionaires, there is another important aspect to consider regarding the space race- international relationships. Potomac Institute Senior Fellow and Board of Regents member Major General Charles Frank Bolden Jr. (USMC-Ret.), a former NASA astronaut and the former NASA Administrator, believes that “the key to success for any of our deep exploration of space going forward is [...] our international relationships” because without those relationships the U.S. could fall behind other nations in the race to human spaceflight. Major General Bolden claims “the more the merrier,” in regards to who the U.S. should work with in the pursuit of space exploration. Looking to the future, Major General Bolden believes that “the 2030s will be focused on sending humans to Mars.” The work done by the Potomac Institute is seeking to contribute to the achievement of those goals.

Collaboration between NASA and the Potomac Institute is furthering the advancement of space exploration. The Potomac Institute is in the midst of working with NASA on a variety of projects aiming to improve the technological developments for space exploration. These projects include working with the Human Research Program within NASA to improve strategic planning for human space exploration, along with modernizing their data management system. The Potomac Institute is also working with the Office of Chief Health Medical Officer, which oversees health and medical policy at NASA, providing strategic analysis and policy recommendations related to astronaut medical standards and requirements. While the actors involved in the race to space today have expanded, collaboration is crucial for the success of human spaceflight.